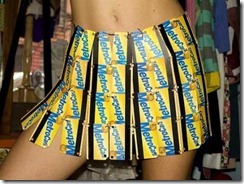 Twice now, on my way home, I’ve passed through the turn-styles at Union Square and had a guy ask me that question.  In fact, I’m pretty sure it was the same guy, though I could be wrong, since the last time this happened before tonight was about a week ago.

So, what’s it mean?  Well, when you ride the mass transit in New York City you have to use an MTA (Metropolitan Transportation Authority) MetroCard, which is what the skirt in the photo is made out of.  People are creative aren’t they?  Anyway, you can get these things and add amounts to them and use them until they run out, or you can buy a weekly or monthly unlimited ride card, which saves you money if you travel frequently.  Unlimited cards are a lot more convenient too because you get them and then you just don’t have to worry about what your balance is, or when you need to add more cash to it.  You just use it until it expires and then you toss it and get a new one.

So, the problem with some guy asking people if they have an unlimited card is that he wants you to swipe it on the turn-style so he can get a free ride.  On the surface, this may not seem like a bad thing, especially if he’s had a bad day and lost his somewhere, and can’t afford his trip home.  It’s also possible that he’s scamming people and never buys a card and is trying to get a free ride all the time.  That’s bullshit.  We pay, so should he.  Or, another possibility is that he’s an undercover cop working with a partner that will write out tickets to people who let him use their card.  Any way you look at it, it’s not the best idea to let a person get a free ride on your card.  It’s just not worth the risk, or worth letting someone else be a cheapskate while you pay for what you get.

Funny story about this though.  I saw a whole family of about 6 people, obviously tourists, all use the same card to go through the turn-style.  They should be glad there weren’t any cops around.

There's a wait before you can use the card again – last time that happened to me it was about 14 minutes or so. Man, that was rough. ha.

OK, i guess there isn't anything that stops you from tapping the same card more than once at the same time. maybe someone should come up with something like this to stop people from using the same card.