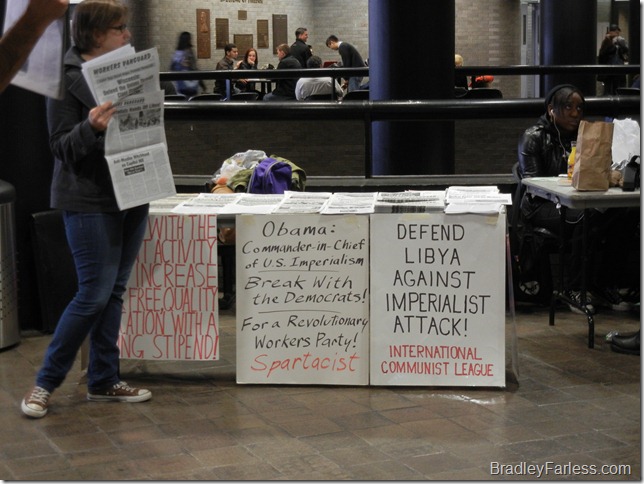 This was one of those moments where I stopped and did a double-take.  I mean, you read about Communists in the US, but the ‘evilness’ of Communism is so deeply ingrained in American society that you never really expect to see people putting their faces on the name.  This table was set up on the second floor of the North Academic Center building, by the library.  I didn’t stop to ask them questions, and I didn’t pick up their newspaper, but thinking about it later, I realized a college campus is not really that unusual a place to see this sort of thing. 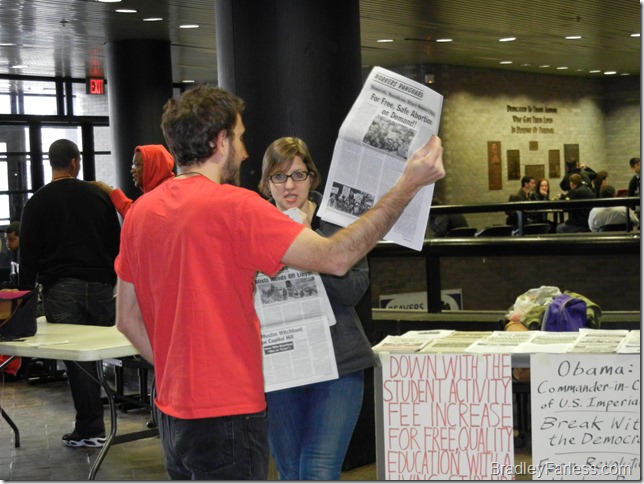 I wonder how this whole thing with Libya is going to play out?  I overheard something about impeachment on the news a day or two ago, but isn’t committing troops for up to 60 days the President’s prerogative?

One of these days, the standard of education will be such that even the common person will be able to understand your last paragraph. Then, maybe, we can actually have an effective government, because people won't be gamed so easily.

Anyway, to the statement about Obama's critics… That's a rather blanket generalization, as to suggest that anyone disagreeing with The POTUS is unreasonable, and shares the same agenda.

Actually, keeping a debate on the 'party' (dem vs repub) lines, is textbook divide & conquer. Parties squabble and point fingers, meanwhile on the bigger chessboard, pieces are moving into position globally for a checkmate.

Obama's critics are just being unreasonable, but they have an agenda.

We were talking about this in one of my classes last week and I said that if the US commits anything to this other than humanitarian aid, everyone's going to start screaming that it's another US led war. I was right.

Heh! Obama just can't win, can he? He hasn't put in any ground forces yet (so this isn't exactly a full scale ware) but a no fly zone enforced with allies should help curb things down a bit. At least until the next President that is.

“The President does not have power under the Constitution to unilaterally authorize a military attack in a situation that does not involve stopping an actual or imminent threat to the nation,” -Senator Barack Obama

Obama made the assertion in a Dec. 20, 2007 interview with the Boston Globe when reporter Charlie Savage asked him under what circumstances the president would have the constitutional authority to bomb Iran without first seeking authorization from Congress.