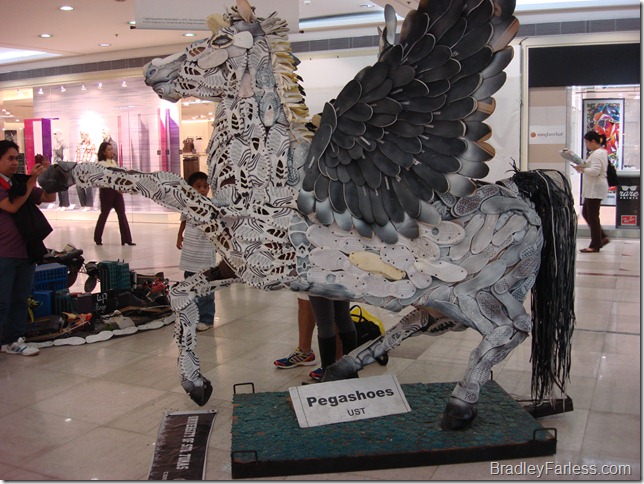 This artfully rendered version of Pegasus, the mythological flying horse, was created by students (I imagine the art majors) from the University of Santo Tomas and is on display in Gateway mall in Cubao, Manila.

I thought it would be fitting to post this today, as a scheduled post, since I’ll be flying myself, likely somewhere above Alaska or the nearby Pacific Ocean when this goes live.

Fare the well, Philippines.  I’ll write a longer post about my final impressions of the Philippines later.

Do people actually do this in any other country?  I’ve never heard of it before.  Is it strictly a Catholic thing? 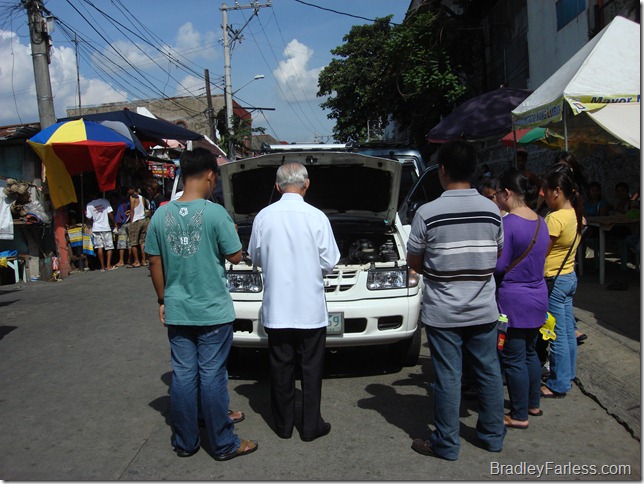 In the image above, you can see a group of people gathered around a new vehicle.  The man in the white top and black pants is a priest, probably from the nearby Our Lady of Peace Cathedral, which is a popular pilgrimage destination for people who are about to embark on trips.

I’m not sure if there’s a process to this, if different parts of the vehicle are blessed at different times and I just stumbled across them as they were getting to the engine, or if having the hood raised and the engine running is just the standard way of having a vehicle blessed.

As weird as this seems, it makes sense in a way, and makes sense that they’d come to the Cathedral that’s known as a place for travelers to receive blessings to have it done.

If you stumbled across this post looking for information about how to get your car blessed at the Cathedral, click this link and then scroll to the bottom of the post to see a picture of the sign showing the hours for car blessings, as well as contact numbers. 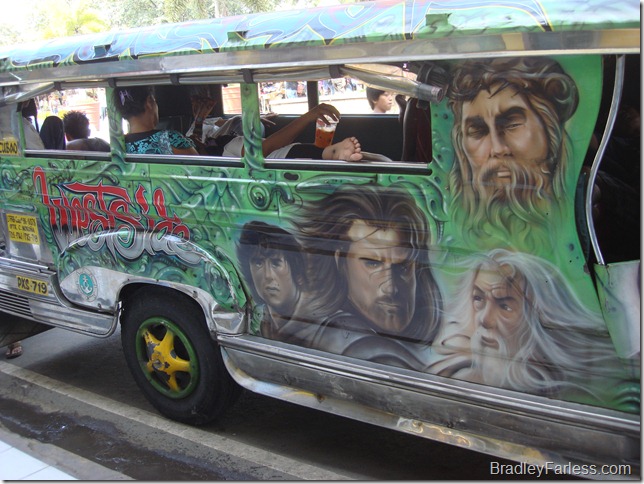 Well, I guess we know where Jesus, hobbits, Aragorn and Gandalf are hanging out these days. 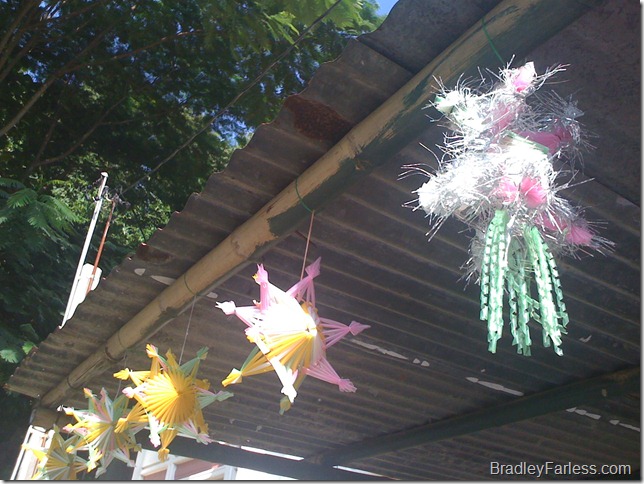 My wife once told me that Christmas comes early in the Philippines.  She didn’t mean that the date it’s celebrated is any different than any other place, but just that people get into the Christmas spirit earlier than usual.

Where I’m from, the shopping spirit hits a bit early, but that real Christmas spirit doesn’t seem to catch on until at least the day after Thanksgiving.  Obviously, there is no Thanksgiving in the Philippines and while Halloween (trick-or-treating) is celebrated in some posh villages, Christmas is something that most every Filipino gets behind quickly and early.  I think it’s probably because it’s associated with the birth of Christ, and the Philippines has the highest population of Catholics of any country in the world.  It may also have something to do with the poor conditions in the country.  I’m sure a lot of families are looking for an excuse to feel cheerful about something.

As early as last week, we’ve been hearing Christmas songs playing on the speaker systems in some of the malls.  I even saw Christmas decorations for sale already, including plastic trees.

My wife says the rule of thumb in the Philippines is that if the month ends in “-ber”, then people will start looking forward to Christmas and set up decorations, some of which will remain up until February, if not all year round.

Getting Marble’s export permit was a bit difficult, but not because of the process itself.  It was getting there that was annoying.  Before we headed down to the BAI, we had to stop by the vet to pick up her health certificate.  The vet didn’t have a printer in the office so we couldn’t get it on the spot.  The problem with that is that the vet is sort of out of the way when it comes to getting transportation to Manila from Antipolo.  It is on the road that leads out of town though, so instead of backtracking to the center of town to get an air conditioned FX (a passenger SUV that’s been converted for public transportation) we walked out to the curb and flagged down a Jeepney instead.  Thankfully, it was overcast and kinda cool with the breeze since the windows stay open in the passenger area except when it’s raining.  Unfortunately, that also meant we got dusty and had black boogers later.

After a tricycle to the vet, a jeepney to Manila, the train to Quezon Ave and then 2 more Jeepney’s to Visaya Avenue by the Quezon Memorial, we finally arrived at our destination.

Despite the appearance of this place, the people inside were very efficient and very friendly.  The e-mail I’d received from one of the people that works there said the wait time for the export permit was about an hour, but I had everything I needed and was out the door in about 20 minutes.  I did have to go around the back of the building to get a dry notary seal stamped into the form, but that only added another 10 minutes, most of which was walking.

With this out of the way, the only thing left to do with Marble is to stick her in a carrier and show up at the airport with her.  I do have to find a hotel that will let me stay there with her in Manila for the night before the flight though.  It’s at 7:30 in the morning and it’s impossible to make the commute to Manila at 3:30 AM (it’s 2 hours one way, roughly).

Update (2017): This is a Flickr slideshow of pictures of the cat carrier my wife used in 2011 to bring two cats from the Philippines to New York City. Please note the bolts that were added to the carrier after-market. Make sure you do that. Also, zip-ties were added at the built-in latch points to further secure the carrier. I would bring zip-ties to the airport so that you can secure the door after the airport personnel are satisfied that they don’t have to open the door. Include a bowl for water and food. Ask that your pet be provided with water. Put blankets in the carrier so your pet(s) can stay warm. 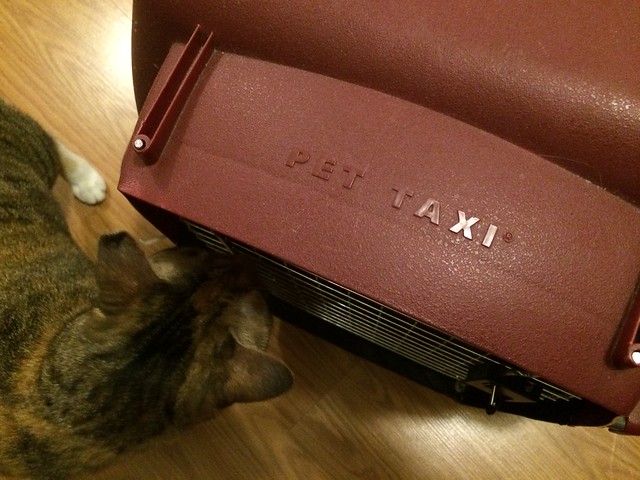