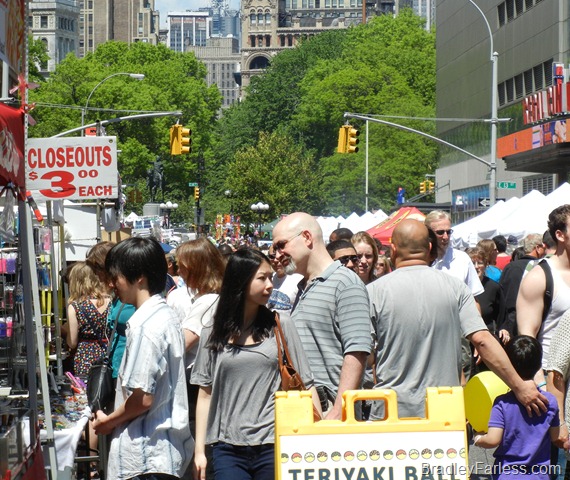 Today, Broadway was closed down from 14th Street, where Union Square is, down to 8th Street for a street fair.  The road was lined on both sides with stalls selling everything from costume jewelry to barbecue pulled pork.  There were even stalls set up by The New York Times, trying to get people to buy subscriptions, and a booth promoting Islam.  This is a story best told with pictures: 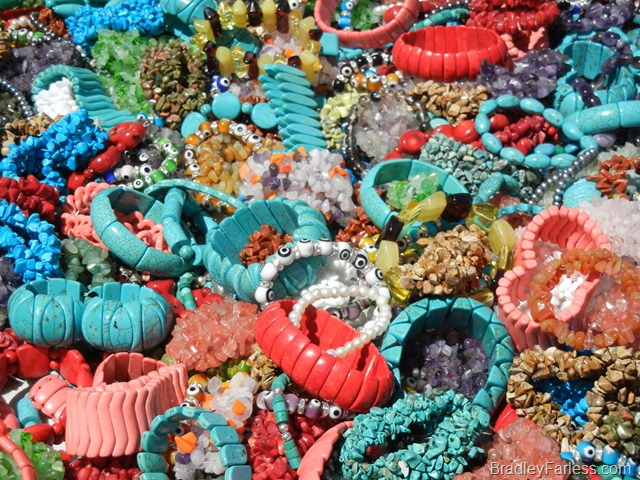 This costume jewelry was laid out in a huge pile across a few tables.  It was on sale.  A closeout sale in fact.  Only $3.00 apiece.  Doesn’t seem like much of a sale to me.  I’m sure if you looked hard enough you could find this stuff for a dollar apiece.  It’s pretty to look at though, especially when it’s laid out together like it was. 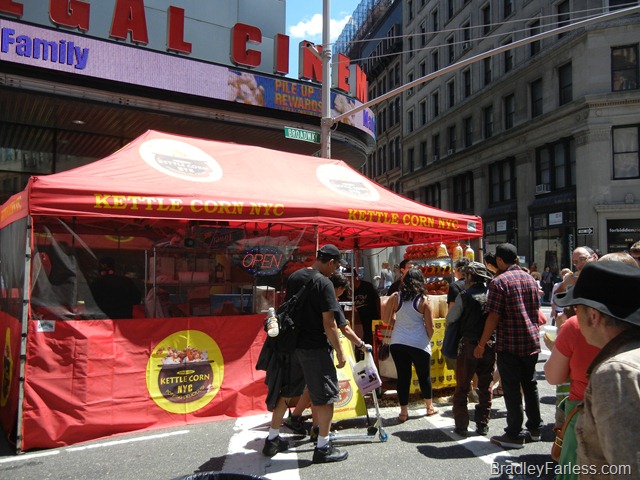 Some $9.00 bags of kettle corn.  If you’ve never had kettle corn, it’s sweet.  It tastes awesome and smells great. 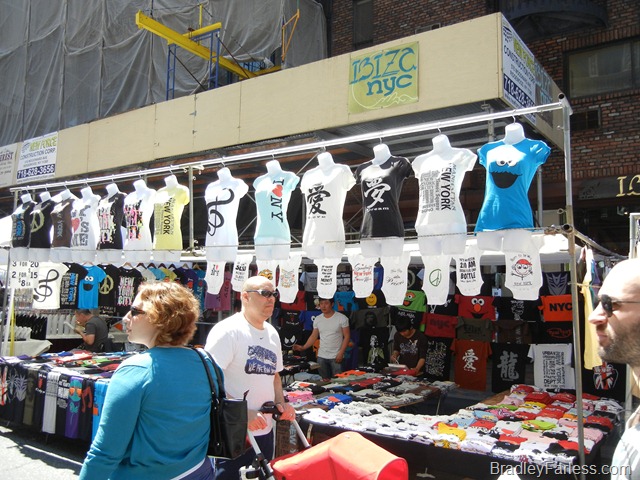 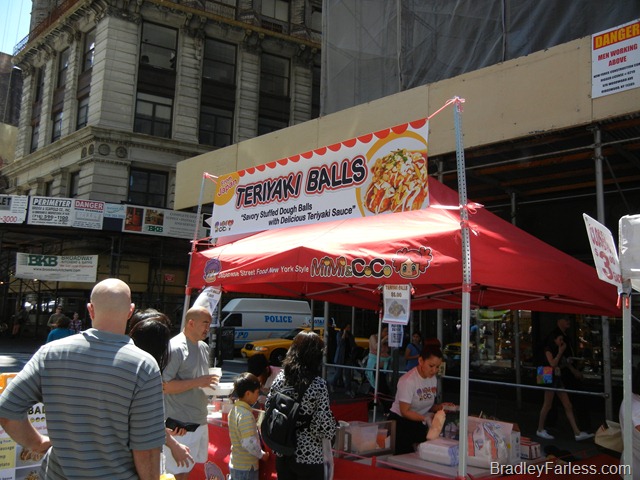 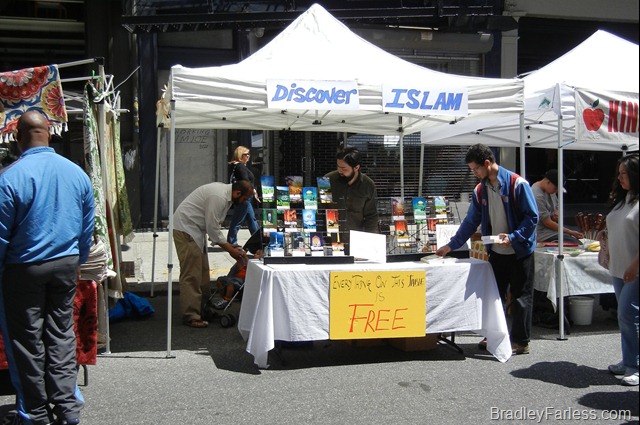 I stopped by this booth to look at what they had to offer.  The sign on the front of the table says that everything on the table is free.  The guy in the blue jacket on the right spoke fluent English and Spanish, and the Korans he’s putting down are translated into Spanish.  The Lower East Side has a lot of Hispanic families, so maybe that’s the demographic they were mostly prepared for.  I took a few of the flyers.  I’m sure they’ll make great reading material for the train.  The guy in the blue jacket seemed encouraged by my interest in the flyers and asked me what I know about Islam, so I started talking about dates, like Mohammad’s birth, death, the first revelation, etc.  I know these things, since I just learned about it in an Art History course and I’m taking a test over it tomorrow.  He asked me if I wanted to spend a few minutes learning about the basics of the Islamic faith.  I thanked him, but said no.  It’s not that it wouldn’t be interesting, but given recent events, I don’t want to hang around anything promoting Islam.  Some nutball might show up and do something violent.  Besides, I have a feeling he was going to tell me about the 5 pillars of the Islamic faith: Attestation (“There is no god but God, and Mohammad is his prophet.”), Alms, Prayer (5 times a day), the Hajj (pilgrimage to Mecca), and fasting during Ramadan. 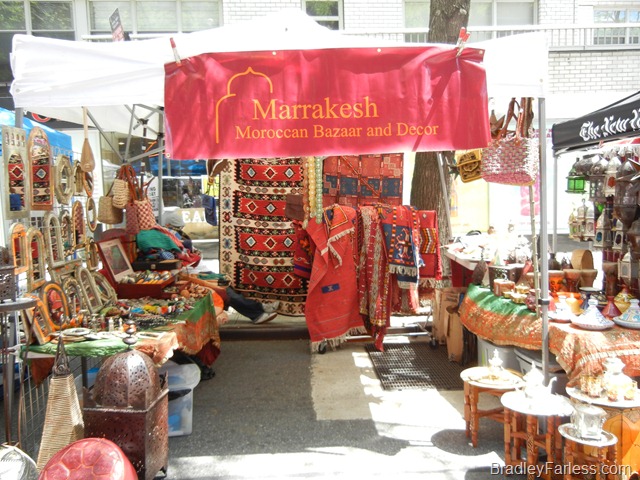 There were even Moroccan rugs! 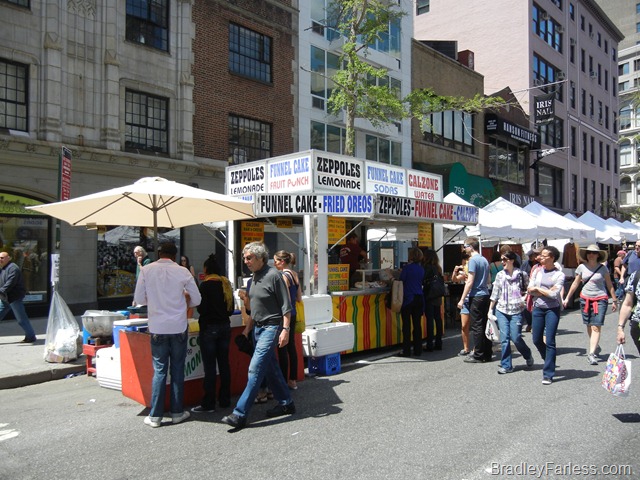 And funnel cakes!  I love funnel cakes.  I didn’t get one though, because I was on my way to meet my mom for lunch.  It was Mother’s Day, and I didn’t want to spoil my appetite.

I saw a LOT more than just this street fair today, including some Asian cultural festivities, but I’ll save that for a post tomorrow, or the day after.  I hope you enjoyed the photos!

I never have and don't think I ever will try fried Oreos or fried Twinkies. They're bad enough already. =) I don't think I could give up funnel cakes though.

@reesan As sinfully good as it sounds, Fried oreo's are not. At a San Genaro festival in Little Italy a few years ago, I had the opportunity to try them, it was a toss-up between that and fried twinkies also. x_x

The fried Oreo's (6 per order) were an oily mess. The already oil based creme filling mixes with the deep fryer oil creating a dangerously hot ooze upon biting.

While they sell a lot of them at the stands, you can't beat the original Zeppoles / Funnel Cake with confectionery sugar.

In the last pic on the awning of the funnel cake stall it advertises “Fried Oreos”. They are probably delicious but sound like a cholesterol bomb (but not as bad sounding as the Scottish deep-fried Mars bar).

Good luck! I get the feeling that's how most people find these things. Stumbling on them, or hearing about it from a friend.

Cool, I will definitely look online.
I seem to get calls from friends in the city that are at these events also by stumbling on them.

It seems a bit lacking though. I can't imagine that's all that's going on. I also couldn't find any list of events that listed the two things going on in Union Square on Sunday, or even the basketball game on a full size portable court that was happening there yesterday.

Are these happening every weekend now?
Do you know of any resource on-line that has a calendar of events for NYC street fairs?

Last year I went to the Big Apple BBQ in Madison Square Park. While the food was less than exceptional, I love NYC street fairs when the weather is optimal.

Thanks kahel kuting! There's always something going on there. I'm sure you'll love it!

the photos came out so nice. that place seems very lively! cant wait to get there!

Maybe so, but I still want to do some more studying for it. Thanks!

This was at about 1:30 to 2 PM, and this was the first really warm weekend this Spring, unless I missed it! So, I think that's why there were so many people out. I think most people were just trying to enjoy the warm weather.

By the looks of it, you are well-prepared for your exam tomorrow. Good luck!

I passed through one such fair once, but it was late in the day and pretty dull. Odd..

Also, I see my comments are now coming up as the Hochies. I'm sure you already noticed, but I'll sign it anyway…