So, today is my 30th birthday.  I guess that means I’m old now.  It’s one thing to be in your twenties, but when you’re in your thirties, well, I remember thinking that was really, really old when I was a teenager.  Somehow it doesn’t feel old now though, now that I’m the one pushing past 30.  I think I’ll write a different post about what I’ve learned about life over 30 years.  For now I just want to talk about the day. 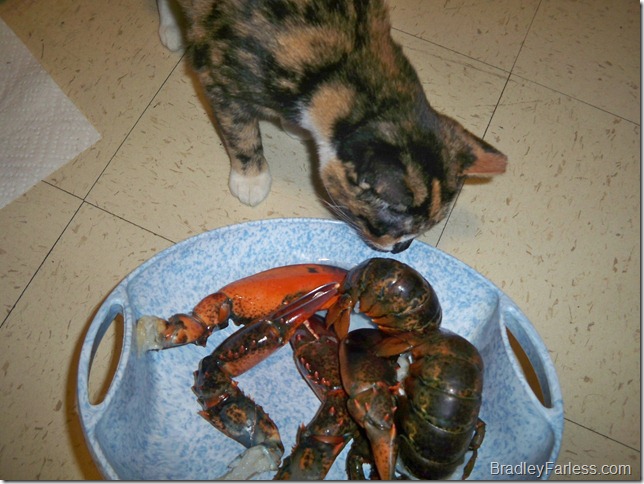 This is the first time in years that my birthday hasn’t been on a weekday, so I didn’t have to go to any job or classes.  Instead, I went with my mom to Chinatown to buy lobster and shrimp for my birthday dinner.  Walking through Chinatown always brings back memories of Singapore, especially when I walk past the small restaurants and they have the ducks and chickens hanging in the windows, and I see people ordering cuts of meat over rice, like the “chicken rice” and “duck rice” in Singapore’s hawker centers.  The sounds, the sights, the smells, all very Chinese, obviously, and I couldn’t help but think of my wife, who isn’t here with me to celebrate my birthday this year.  We had a lot of good times together in Singapore, and I’m looking forward to when she’ll join me here so we can make more happy memories together.  Her absence damped my spirits.

Like I said, being 30 now means I’m old.  I got a card from my dad and the text says: [Front] “You’re 30!  You’re Mature!  You’re Responsible!” [Inside] “And To Teenagers Everywhere, You’re Old!”  So, in the spirit of that oldness, my mom gave me a booklet called “1981, Remember When…, A Nostalgic Look Back In Time”.  A lot of cool and interesting stuff happened in 1981.  There was an assassination attempt on President Ronald Reagan, a civil war started in El Salvador with many human rights abuses being committed by the US-backed government, Prince Charles and Lady Diana Spencer got married, and the US Department of Agriculture decided that ketchup counts as a vegetable (WTF?).  One of the best parts of the booklet, though, are the advertisements from 1981 that it includes.  I scanned some to share here:

Personal computers were just starting to become affordable.  This Sinclair ZX80 even ran BASIC, and according to the ad you could be writing complex programs in a week.  With confidence even!  The first computer I ever used was a Commodore 64.  I remember it loaded up in DOS, and through trial and error I figured out how to start the computer games we had for it, which ran on 5 inch floppies.  One was a Superman game that really pissed me off.  Anyway, the Nintendo was a lot better for gaming.

Anyway, my day was enjoyable, overall, but now the day is mostly over and I have some Anthropology homework that’s due by midnight!

You too? I broke a joystick one that Superman game if I remember right.

Thanks, by the way!

I too had the Commodore 64. I loved that thing – oh the memories of destroyed joysticks from playing Summer Olympics. Ah, those were good times.