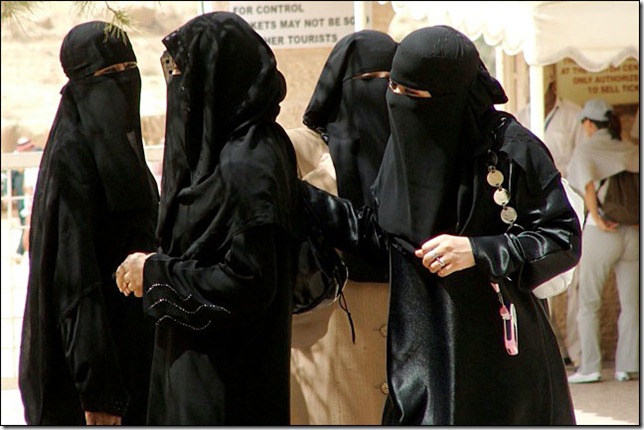 No, these are not female ninjas.  (Image from: MuslimVoices.org)

It seems like I’ve been hearing more and more about Islam over the last few weeks.  The 28th of March through the 3rd of April was Islamic Awareness Week.  There were posters set up in various parts of the CCNY campus with quotes from the Koran on them.  During the same week in an art history class, we happened to cover Islamic art and did a brief overview of the beginnings and major points of Islam.  Then the French law banning the burqa came into effect and wound up as a point of discussion in an introductory anthropology course I’m taking.  Islam is a fascinating religion that, due to American media, and media in general, it’s generally painted in a bad light.  I don’t want to go into that here, but I will say that news media is all about ratings, so, just like your favorite TV show, the goal is to be as sensational as possible to retain repeat viewers.  After seeing some of the news reports on the law passed in France, I had a few questions that came to mind, and after thinking about it for a while, I realized that there was a better solution than what the French legislature came up with.

The first thing that came to my mind is how politically correct we all are, here in the Western world.  Would things play out differently, I wonder, if groups of Western women immigrated to Saudi Arabia and were protesting the proscribed manner of dress (niqab)?  Isn’t respecting the laws and culture of the country you go to a basic courtesy, even when simply visiting?  What more, for an immigrant that has been granted the right to live in another country?  To me, it simply feels arrogant to expect a country to realign its culture and values to suit the sensitivities of an immigrant population.  Within the sovereign borders of the country of France, why should the native citizens strive to protect any culture, any heritage, but their own?  If the culture and society don’t align with that of the immigrant’s, then wouldn’t it be easier for the immigrant to have not immigrated there in the first place?  Or to re-immigrate? I also wondered why this problem is being argued as both one of religion and one of culture.  There are people who say the wearing of the niqab is a cultural development in certain Arabic cultures, and that Islam has been twisted and used as a weapon to enforce this method of

I also wondered why this problem is being argued as both one of religion and one of culture.  There are people who say the wearing of the niqab is a cultural development in certain Arabic cultures, and that Islam has been twisted and used as a weapon to enforce this method of dress on women.  A Pakistani Muslim woman I go to class with here in New York affirmed that the niqab is a cultural development.  She wears a head scarf, but no face covering, and I doubt she would ever put on a niqab.  I’ve met plenty of Muslims while traveling and living in Southeast Asia, and they don’t wear niqabs.  Does that mean they’re all ‘bad’ Muslims?  Of course not, because the niqab isn’t a religious requirement for Muslims any more than wearing an ankle-length dress is a Christian requirement for Western women.  Wearing the niqab is a choice, based on cultural traditions.  That being the case, the French ban on niqabs is not an attack on the Islamic religion.  It’s an attack on the cultural practices of a segment of the Arab immigrant population.

I also couldn’t help but wonder how these women immigrated to France in the first place.  At some point, they would have had to have provided travel documents and immigration documents with photos, and to verify that they are in fact the person in the photo.  If they were willing to remove the niqab for immigration, why are they not willing to keep it off, or transition to a head scarf (like the majority of Muslim women wear) to better assimilate into their new society?  I’m not saying they should, I’m just asking why there’s a contradiction.  Also, how can a person expect to get a driver’s license without having their photo on it, and without verifying their face on request by a police officer?

From an American perspective, I think these women have a right to dress however they want to, so long as it does not create a safety hazard for themselves or others.  So, where is a good middle ground?  Perhaps the better course of action would have been to require the removal of the niqab only upon entrance to public buildings (schools, hospitals, courts, welfare offices, etc.), while entering public transportation that requires photo identification, while driving since it limits the field of vision, and the upon the reasonable request of a police officer or other official when required for identification purposes.  Isn’t that the main problem here?  That wearing the niqab prevents proper identification?  Take it a step further.  When proper identification requires removal of the niqab, remove the woman to a private room and have her identity verified by a single female officer/official.  Simple right?  I understand that this can cause some logistical problems in providing female employees at all of these locations, but this is just a suggestion that I’m sure would be better received than a blanket ban.

The blanket ban, whether people consider the niqab religious or simply a cultural development, seems like an extreme measure that suppresses a person’s right to self-expression.  Like any immigrant, a Muslim immigrant will import their culture along with themselves, and while it’s important to define what isn’t acceptable, like outlawing shariah law in a secular nation, it’s also important to allow people to express themselves since it is a foundational value of any Western democratic nation.  I’m all for passing laws to protect people, but only when those laws are reasonable, and this French burqa ban, to me, seems like overkill.

Ah, you just made me remember something. The law France passed doesn't specifically mention Muslims or their clothing. It's worded generically.

You raise a good point. I didn't even think of that. What's to stop a group of guys (or women) from dressing in niqabs and committing robberies? It's the perfect cover.

Ironically there are numerous counties in the US were the Niqab would be illegal. This is not because specific regions hate Muslims but because wearing a mask (or anything covering your face) is prohibited due to its abuse by vandals.

Although one could wear a mask/Niqab, you need a permit which are usually only granted during parades.

France IMHO could have handled this better (i.e. in the public we need to see your faces and anyone covering their face will be stopped) instead of attacking a specific culture.

From the tid-bits I have learned of your travels around the world, (military, expat, now student…. I have a renewed faith in our secular education system.