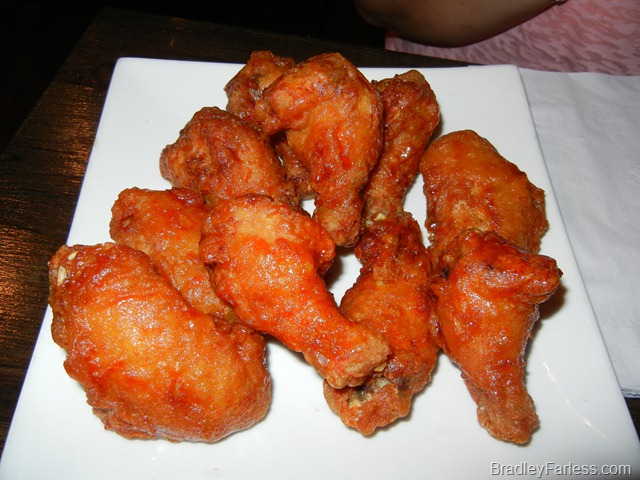 Last May I went to a restaurant called Boka: Bon Chon on St Mark’s place in Manhattan.  I wanted to take my mom out for something nice for Mother’s Day and she’d never had Korean food so it seemed like a good choice.  We were both very satisfied with the food we ate, and after hearing back from some people that the fried chicken there is really awesome, we decided we’d go back to try it out at some point.

We finally did manage to get back there and try the fried chicken at the end of last month and it is amazing!  We only ordered a small plate because we weren’t sure if we’d like it or not.  Now I wish we’d just gotten a big plate of the fried chicken and nothing else.  Just looking at the picture is making my mouth water.  The skin of the chicken was crispy and tasty and the meat wasn’t oily.  I could sit down and eat a bucket of the stuff.  Well, maybe not the spicy fried chicken.  The spicy fried chicken has a real kick to it.  I can’t figure out which I like more.  I think I actually prefer the spicy kind, but I probably couldn’t eat as much of it as the other. 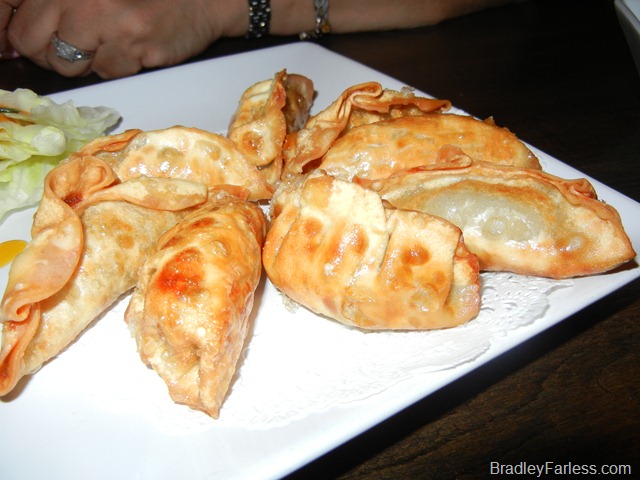 We also got a plate of fried dumplings.  They were crispy and looked nice, but the inside was a bit mushy.  Maybe that’s the way they’re supposed to be.  I don’t know, but my mom didn’t care for them too much. 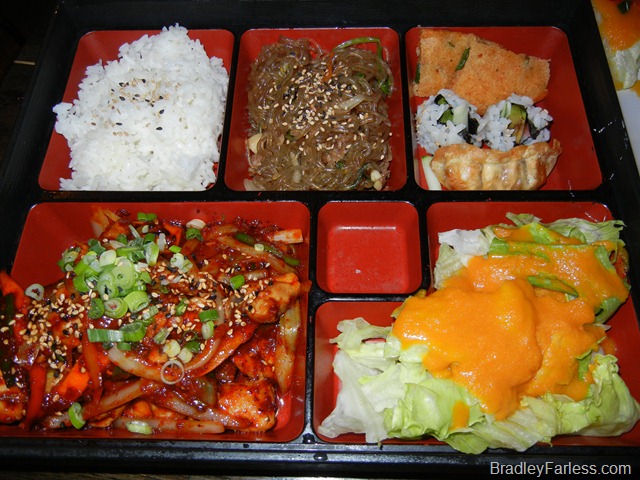 We also ordered this.  I don’t recall the name of it now, but it’s a spicy chicken ‘box lunch’.  I was surprised when they brought it out, because the tray looks just like trays used at Korean restaurants in Singapore.  I’m not sure if it’s still there, but I specifically remember there was a Korean restaurant that used these trays in the basement level of the Cineliesure (?) Mall in the Orchard Road area.

We figured that between the chicken, the dumplings and the ‘box lunch’, we’d have more than enough to eat for two people, and we did wind up bringing some of the chicken and dumplings home as leftovers (which disappeared quickly that same night).  It was pretty filling, especially since we were eating it all with white rice.

In the future, when I go to Boka: Bon Chon, the fried chicken will always be one of my choices.  Maybe the best option would be to get a large order of the fried chicken and another dish (like a bowl of bibimbap) and then ask for smaller plates and share the meal.

TheHOchieS: I have your blog in my Google Reader so if you do get around to posting it, I'll take a look at it.

As for the new semester, it's turning out to be quite a bit of reading. I have a few papers coming up due soon too, so this should be a busy semester. Interesting, but busy.

Ah yes, the fun that will be had when you and your wife can go together to all the wonderful things NY has to offer! Looking forward to those future posts. I went to the zoo to check out the lego pieces. Unfortunately my computer is STILL down, so that post will have to wait but if you're interested, I'll drop you a link when it's up. The guy who does the pieces is amazing, I'll say that much. Congrats on the awesome GPA. Hope you have a fun semester this time around too. Can't say I've played any of… Read more »

I'm holding off on going to visit anything until I can go with my wife, unless it's for school, like when I went to the Met. I'm really looking forward to taking her around to all of the attractions here in the city. Last semester wrapped up just fine for me. Spring semester I mean. I had 3 A's and a B+. Summer Session netted me two more A's, for a total 3.883 GPA. I'm satisfied. I got what I earned. I didn't take the course I got the B+ in seriously until I screwed up the midterm, so I… Read more »

The Bronx Zoo has some special Lego presentation running – it might go through until the end of September, I believe. I'm going to try to catch that before it ends.

How was the overall semester wrap up for you?

What video games did you play? I'm working on “Catherine” now. I love the style, but talk about anxiety doing the gameplay. I really am liking it.

TheHOchieS: Looking at this is making me hungry again too. It also made me realize how long it's been since I wrote a blog post, and consequently how long I've been sitting on my ass doing nothing while waiting for Fall Semester to start. I think next summer, during the two and a half weeks between Summer Session and Fall Semester, I'll either go to zoos and museums almost every day, or volunteer my time at an animal rescue shelter. Though, it was fun blasting my brains out with video games for two weeks straight. I haven't done that in… Read more »

I've been gone for a while because my home computer is not working (still isn't) so when I have time I'll have to catch up with my reading on your blog. I would like to say though that seeing this on top of the page made me both happy and really hungry. Glad you finally tried the chicken! It's awesome and I need to go back sometime too. It's been a while since I've been. I'll go for that and some takoyaki around the corner. Yum times. Be safe this weekend – looks like the hurricane might actually do something… Read more »

Jack: I guess they really are used just about everywhere then. In Singapore, the 6th slot in the middle was where a dab of wasabi was put, because the meal I got had sushi included.

Hah! The ubiquitous red and black bento tray. We have a lot of Korean owned Japanese restaurants here in Seattle [don't ask why, I don't know!]. They all have those trays for their meals. It does limit you to having to serve 5 items, t

Thanks for the tip, Mae.

Ahhh this looks absolutely delish! I miss New York and everything about it. Especially miss chicken & waffles at Amy Ruth's. Craving for it so bad right now. You should give it a go,
113 West 116 Street, Harlem! – Mae

Kind of like curry for Indians then, huh? I like garlic. I guess you could go overboard with it though.

The problem with kim chee is not so much the chili pepper but the amount of garlic in it. Korean perfume.

Ron, before I moved to Asia I had this horrible idea about what kim chee is and I was scared to try it. Then, one day after moving to Singapore I realized I'd eaten it without realizing it and it was delicious! I love it now. I wouldn't mind trying kim chee chicken. =) I was actually joking with my mom at this restaurant that she should try the kim chee, but she wouldn't go for it. I guess I might try to trick her into trying some. She doesn't care much for spicy food though, so she might not… Read more »

Some restaurant here use to be famous for their fried kim chee chicken. They used the same sauce for the kim chee cabbage.

Unless I'm mistaken and that other one is soy-garlic and not teriyaki (I couldn't remember what the menu said it was), then they don't have it here. There were only two choices. It'll definitely be a place we'll visit regularly though.

im glad they already have that here.. and that ive tried it too! try the soy garlic one, its delicious

I can tell moving to the states is gonna make me SOOO fat!! (PS the verification word i had to type was “faters” LOL)