Yesterday, in the early afternoon, I took some time to go out and see the snow.  First, I took some pictures from the balcony, and then I took a few photos while I was out in the street, on my way to Newport Centre Mall in New Jersey.  These photos were taken on the 26th, prior to the big snowstorm that night (last night). 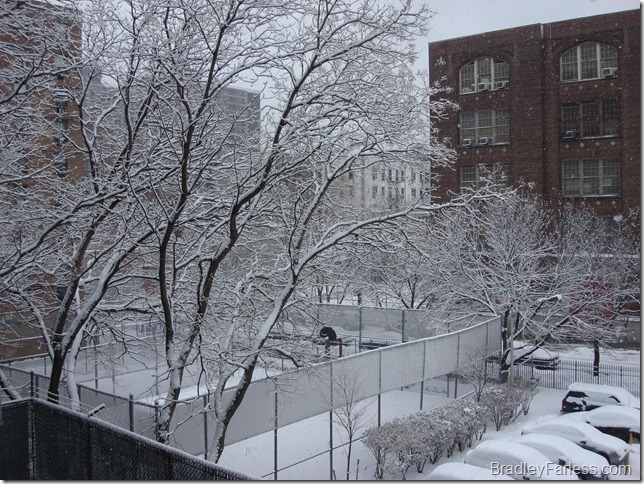 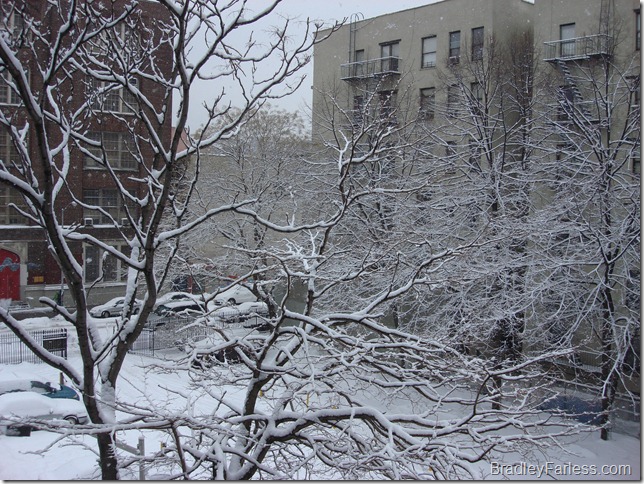 These are photos I took from the balcony before leaving the house to head to New Jersey. 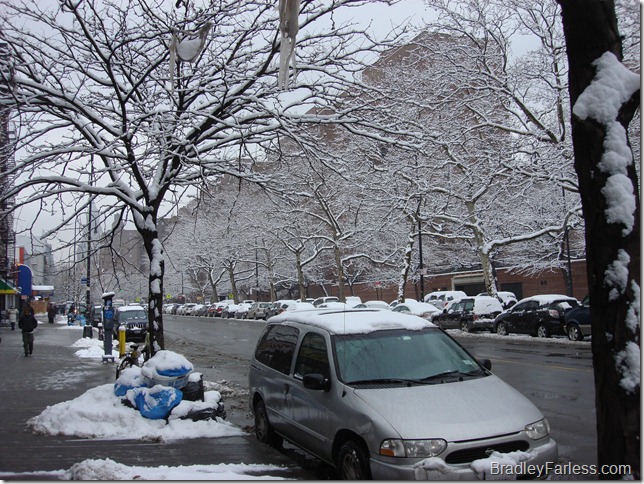 This is a photo of the snow in the trees along 14th street between Avenues B and A, facing towards Avenue A.  As you can see, early yesterday afternoon, the snow wasn’t sticking to the street.  The snow on the ground wasn’t much more than what was there already.  The snow hasn’t ever completely melted since that big snowstorm in December. 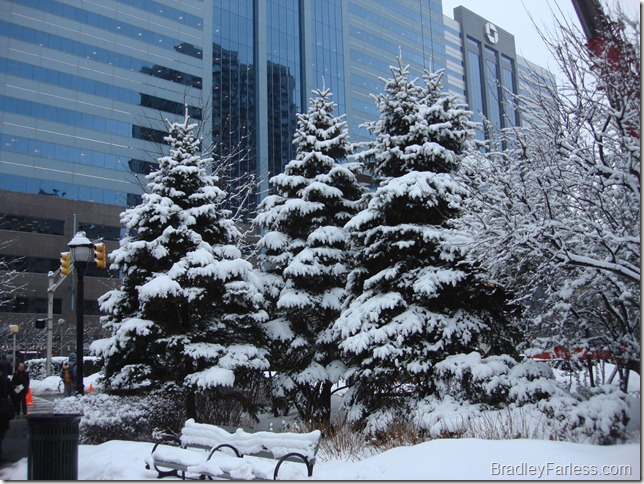 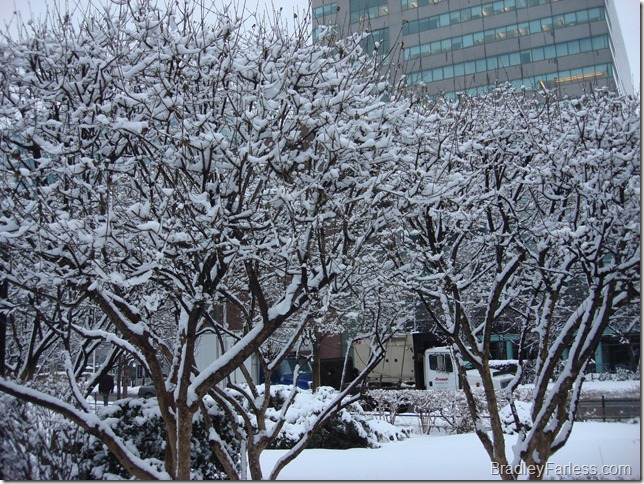 I saw these trees just outside the Newport Pavonia PATH station in New Jersey, where you get off the train to walk to the Newport Centre Mall.  At the time, the snow was coming down in fat, wet flakes and it wasn’t really sticking to the ground at all, but it did give the trees a sort of Winter Wonderland feel that I thought was really nice.  By the time I got home from my shopping trip, the snow had stopped completely.

Later in the evening, the snow started coming down again, a lot heavier than before.  The news was saying that it was going to be a pretty bad storm, and it damn sure was.  At times, I could barely see the building across the street.  I’m still impressed by snowstorms, so I thought it was pretty cool, but I had a feeling it was going to make my day today a lot more annoying than it would have been otherwise.

You see, yesterday was supposed to be my last day of freedom, before going back to school full time.  I was supposed to head out to the school today to register for classes, and then start classes tomorrow, depending on my schedule.  Things didn’t turn out quite that way, because of the snow.

When I was going to bed, the news reports were predicting school closures today, and it had me on edge, because I’m really anxious to get my class registrations done.  I’ve been out of school for over a decade, so going to college full time is a pretty big deal for me.  Sure enough, when I got up, there was a message in red on my school’s homepage, saying that the school was closed.

For a while, I worried about how that would affect my registration, but I realized there wasn’t much I could do about it if the school was closed.  I figured I’d just deal with it as best I could, and rolled back into bed for a few more hours of sleep.  Maybe it’s a holdover from the time I spent in the military, which gave me a lot of exposure to institutional stupidity, but I don’t put a lot of trust in public institutions to make common sense decisions when things don’t go as planned.  I half expected the school to just tell me, tough luck, enroll next semester.  You see, I enrolled late because I was outside the US still when the deadline for normal registrations came and passed.  I also had a few issues with my direct admission since I went to high school in a different state, and I was given last priority to register for classes on the last day of registration.

My fear was thankfully unfounded.  Later this morning, the college updated the message on their website, saying registrations would be extended to compensate for the closure today, so now I’ll be heading up to the school tomorrow to take care of that and all I’ll have to worry about is slipping and busting my ass on the long slope heading up to CCNY from the train station.

Ya, I know you get cold easy baby. I'm starting to adjust to the colder temperatures again, finally. I think you'll love it until the first time you have to step into a puddle of slush to get on the bus and your foot gets wet. =/

those photos look great! although i doubt ill be able to appreciate the snow for more than an hour. i easily get cold you know that. but yeah im excited for you!be safe out there.

I heard it's the snowiest winter on record. Plus, NY has used up its $38 million fund for clearing snow off the streets.

New York City getting so much snow the first winter after I move back here is really weird. I'm disappointed that my wife isn't here to see it all, although I think her amusement with the snow would wear off faster than mine did. Maybe she'll want to go sledding in Central Park with the cats, though that might not turn out as well as your adventure with the dogs. =)

Well, I'm actually having breakfast and getting ready to head up to the school now, so we'll see how this goes.

I heard about the ridiculous amount of snow that is dumping on the northeastern coast and have to say that I am not one bit jealous. That is ALOT! Good to read that the school admin is back on board….for your own sanity.