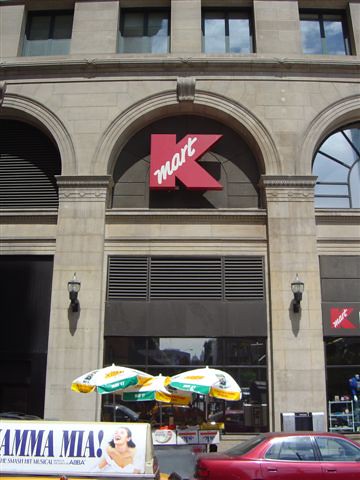 Today I went over to visit my grandmother’s place.  When we left, my mother and I stopped in Kmart on Astor Place to do a little shopping.

After wandering around the store a bit, we got in line to check out leave.  The line we got in was at a standstill.  The person at the register apparently needed a manager to confirm some action, likely a sale price that hadn’t been entered into the system.  When the manager finally showed up, instead of walking down the empty check-out line next to us, where she could access the register, she tapped my shoulder and pushed past me, then pushed through all of the other customers in line.  When she got to the end of the check-out counter, she went around to the other side to access the register.  Uh… hello!?  Why did you push us all out of the way and squeeze past us, and take a longer route, when you could have gone around the other side where there were no people to start with?

When my mother finally got up to the register, the register locked up and had to be rebooted after scanning half of her purchase.  We had to wait for the register to start up again.  That took about 10 minutes, but that didn’t really matter much because we had to wait for a manager anyway.  My mother had picked up two sale items, one of which wasn’t showing the sale price when scanned.  Changing that price would require a manager confirmation and, for some reason, none of the managers were bothering to carry around their walkie-talkies, so finding a manager was a long, manual process.  The cashiers had to walk around until they found one.

When the register finally came up, the cashier scanned the item that wasn’t showing the sale price and then entered the price override.  All it needed was for the manager to confirm it.  When a manager finally showed up, she looked at the screen, which clearly showed the item with the adjusted price entered, waiting for the manager’s confirmation.  Instead of just confirming the action, she canceled it and rang up the item again, meaning the item was rung up twice.  When we pointed out what she had done she seemed confused, but when she finally figured out that there was only one item sitting in front of her, she voided one of the charges she had added, then had to redo the price change and add the manager confirmation.

That’s still not all.

Next, my mother handed over an item that was regular price, one of the things we’d rung up before the register had crashed.  She told the manager the item wasn’t on sale, and to just ring it up.  The manager scanned it, then scanned it again.  So, of course, we asked her why she rang it up twice.  She said she was price checking it, but in a tone that made me feel like she wanted us to know that we shouldn’t be questioning what she does.  Hello? Hello? Anybody home? Huh? Think, McFly. Think!  My mom just told her that it wasn’t on sale and to just ring it up.  I told the manager she needed to do her job correctly and stop wasting our time and confusing us.

She then got belligerent and told me, “What do you think I’m doing standing here?  I’m doing my job.”

So I told her, “No, what you’re doing is making a mess of things.  You show up and ring up that first thing again, even though you were just supposed to add your confirmation.  Now you’re doing price checks when we told you to just ring this thing up, and that it’s not on sale, confusing us and making us think you’re double ringing our purchase again.  Just do what we’re telling you to do.  Do your job.”

She then tried to argue with me about why she had to do the price check, but only made herself look more like an ass, because what she was really saying is that she thinks we’re stupid, and she knows better than us, when she was obviously making mistakes and doing something unnecessary.

In the meantime, the poor guy running the register was getting so agitated that he started making mistakes ringing up the rest of the stuff and instead of encouraging him, she started chewing him out in front of us, which only added to his discomfort.  It probably didn’t help that she kept sticking her hands in the way, pushing buttons, and not just letting him do his job.  She was only supposed to be there to add a confirmation.  I wanted to tell the manager to fuck off so the poor guy could calm down and get his head right again, but I just let it go at that point.

Total time at the register?  About 45 minutes.

I didn’t much mind when she made the first mistake, because everyone makes a mistake, but when she started acting stupid again, it just pushed a button.  I know what good customer service is, having recently spent some time doing it, and paying attention to your customer is a big part of that.  She obviously didn’t care what we had to say when she ignored us and did that price check.  I think that was the most annoying part of it all.  She ignored us completely and just did whatever the hell she wanted to do, confusing us and further screwing up our shopping experience in the process.

Of course, this is Kmart we’re talking about here, but still, I expect more than that from a place where I’m spending money.

If you're on the internet looking for people who share your opinion about the store, then I think you've reached the point of needing to find another job. I wish you the best of luck. I've worked under quite a few people that made my life miserable for no apparent reason, and in some cases it was when I was in the Army and couldn't quit, so I can empathize.

I work at this K-Mart, I think the specific manager you're talking about is Ms. Sonia, A short, African-American lady with a curly afro and a caribbean accent. She has an attitude like that all the time, even with the employees there. The only people she doesn't talk like that to is the people above her. I could be wrong about who you're talking about but that sounds like something she would say. If you think being a CUSTOMER there is awful, try being a lower-level employee! You get treated like shit, I feel bad for the cashiers, they get… Read more »

Thanks for giving an inside look at the way the store is staffed. It somehow doesn't surprise me that they're understaffed, probably to meet profit margins. Still, it makes for a wholly unsatisfying shopping experience, and I haven't been back to this Kmart since. I'd rather travel all the way uptown to Target.

I worked at that Kmart for three months while I was saving for my upcoming internship, and your experience was pretty typical. The store has three floors with 15+ registers going at any given time, yet there only seemed to be one or two managers floating between the customer service desk, street-level registers, basement registers, and 3rd floor electronics registers. It was vastly understaffed, with awful communication to boot. To make matters worse, the stock/pricing department was truly awful, and price overrides were more the rule than the exception. Whether I knew the correct price for an item or not,… Read more »

Sure was. It was one of those times when I really just wanted to bang my head against a wall. I would have left, but I really wanted the Valentine's card I was buying, and my mom wasn't going to budge anyway.

Ya, if she acted that way to me and my mom, all high and mighty, I imagine she's done it before, and the only reason she still has her job is probably because she's in a union. There are still lots of unions up here.

45 minutes? 45 MINUTES? Welcome to the US of A. If something like that had happened in Italy the whole line of people would have their hands wildly gesturing in the air and a chorus of loud angry voices directed at that manager. That person oughtta be fired, what a jackass.