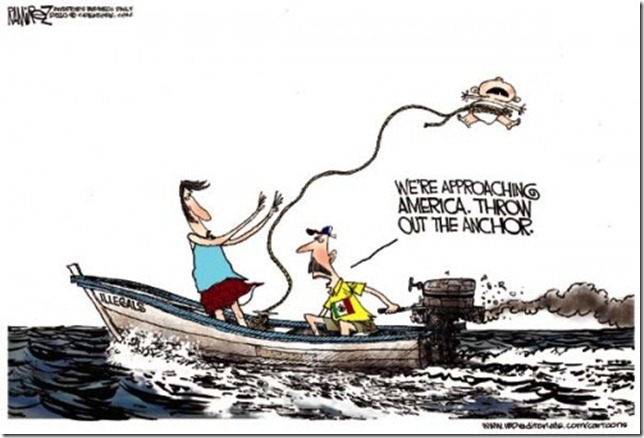 If you’re not familiar with the anchor baby problem, there’s a part of the 14th Amendment to the US Constitution that basically makes it so that any child born on US soil is granted US citizenship.  This was put in place to help ensure that the children of former African slaves would be guaranteed US citizenship.  Unfortunately, it is now being abused by illegal immigrants who enter the US and ‘drop’ an anchor baby, which can later grow up and bring in the rest of the family legally through regular visa application processes.  The problem is mostly with Mexicans, since it’s so easy for them to hop across the mostly unguarded southern border of the US.  There are other opportunities and places where foreigners attempt to use babies as an anchor to get into the US though, and I’m going to tell you a story about one such event.  This is a story that my wife related to me.  I won’t mention any names for the sake of privacy.

An American man was living a happy, regular life in the US with a well paying job, a wife and two kids.  Due to the economic downturn he was laid off.  Unable to find another job that would maintain the lifestyle he and his family were accustomed to, his wife threw him out of the house and divorced him.  Sucks right?  So much for “richer or poorer”.

I’m not too clear on the details of how he wound up in the Philippines, but he did, and he got married to a Filipina and had a child with her.  She seemed eager to be a good wife, but something just didn’t seem right about her, so he applied for a permanent residency visa in the Philippines and after receiving it told her he wanted to stay indefinitely.  He was testing her, and she failed in epic fashion.  In an honest relationship, it shouldn’t matter if he wanted to stay here or go back to the US.  She should have been satisfied with just being together.  That’s what it’s all about right?  Instead, she flew into a rage and threw him out into the streets.

Three years further on, this American man is still in the Philippines, working to save up money to allow him to move back to the US at some point and trying to find a way to get custody of his child.  He’s still technically married, but has filed for an annulment.  Since the wife threw him out of the house, she’s required to pay for it, but she’s stalling.  She doesn’t want to go through with it because she wants to use the anchor baby method to try getting into the US.

Luckily, the guy still has some protection from letting this woman carry through with her evil agenda.  By birth, the child is American, but only if the father signs off on the paperwork to process it.  He won’t do it until she processes the annulment.  She won’t process the annulment because it will stop her from using the baby to anchor herself in the US.  So, that’s where the problem is.  Neither one wants to budge and there’s really no reason why the father should.

Hopefully, at some point the guy will find a way to get the kid back from her and get back into the US with him, leaving the conniving bitch to rot in the Philippines.  I’m glad I don’t have this issue.

Me too, but most Americans are so caught up in that “we have to take care of everyone” mentality that they're resisting a move to repeal or change the amendment. It doesn't make sense how Americans are constantly worried about everyone else in the world except themselves.

I hate it when rules/ laws that are put in place to help people are taken advantage of! especially when t's at the expense of others!!!

yes there is always this issue, taking advantage of other people. gold digging bitches.